Possibly the Most Colorful Race Ever
In case you haven’t noticed, 2016 ushers in another Presidential election year. It’s time for the United States of America to elect a new White House occupant. 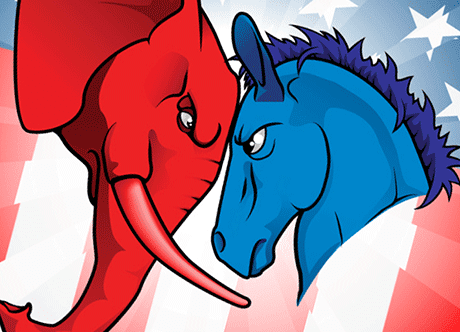 This election cycle is turning out to be one of the most colorful ever in U.S. history as we began with fourteen candidates vying for the GOP nomination with a front-runner that is familiar to all of us yet outside of the political insider circles. The Democrats are sporting a viable female candidate and two men, one a proclaimed democratic socialist and the other a polished former governor.

So what?
We realize it’s hard to stay focused when so much is going on. You might even say; So what?
It’s easy to fall into apathy in a national election. While interesting, many of us have arrived at the opinion that there’s little we can do other than vote that will really change how things go in our country. Yet, we recognize that the privilege to vote in a free election is a hallmark of the greatest nation in the history of mankind.
Why is it important for those of us in the EMS arena to pay close attention to the persons chasing the role of “Leader of the Free World”?
On the Horizon
Consider the front-running candidates and their positions. Doing so will point you to what’s coming on the Horizon and the potential effect on EMS in America.
On the Democratic side of the fence, should candidate Bernie Sanders carry the party to a third straight term in The White House; he has vowed to work toward a single-payer healthcare system for the entire nation.
The implications for your EMS billing office are potentially enormous. This one step could eradicate our current private health insurance system and lump all healthcare and the payment for healthcare into a “Super-Medicare” model where the government would be the ultimate payer and all claims for payment would be submitted to this one insurance source.
Talk about a huge shift, should that come about!
On the other hand Hillary Clinton, potentially our first-ever female president, would keep the current Affordable Healthcare Act intact but expand upon it by proposing to cap premiums and look toward more cost efficiencies.
Anytime a politician uses a derivative of the word efficient, it typically means more oversight, reporting and regulations controlling what we do to be paid. Most likely, a Clinton administration would seek to expand the ACA (or “Obamacare”). Already we have seen some significant changes in deductibles and coverages on both the reimbursement side and also the side that affects what your EMS agency pays (and ultimately you pay) if you are a career EMS provider who also is extended healthcare benefits. What would a Clinton expansion of the program really mean to you and me?
The Elephant Speaks!
Consider if the “elephant” lands in the Oval Office.
Donald J. Trump has blown out of the gates as the surprise GOP front-runner. A multi-billionaire businessman, he has vowed to repeal the ACA almost immediately upon taking office. Such a move will have a profound effect on the healthcare reimbursement picture and will set in motion sweeping changes, reversing trends we have seen over the past nearly eight years in the ACA environment.
Aside from the direct healthcare system implications, even issues such as immigration reform may have a profound effect on those of you who practice in areas where undocumented aliens make up a sizeable portion of your patient population.
What should we do?
The best thing you can do this year is to stay informed. Follow the candidates and their positions on the issues, especially noting their plans for the future of healthcare and healthcare payments in the future of our country.
Most importantly, get out and vote! If you’re not registered, now is the time to do so. Follow the American Ambulance Association and/or your State Association or your Union positions on who to support in the election in order that you may vote for the candidate who you feel will be most favorable to EMS.
The Ambulance Billing Services blog is brought to you as an educational tool by Enhanced Management Services, Inc. Enhanced Management Services, Inc. is an all-EMS third-party billing contractor serving Fire/EMS agencies across the United States. To learn more about who we are and what we do, please visit our website at www.enhancedms.com and click on the “Get Started” button on any landing page.