We talk a lot about Medical Necessity in the ambulance billing office. Medical necessity and Reasonableness are key in determining whether or not an insurance payer is obligated to pay for ambulance transport, especially for Medicare and Medicaid patients. 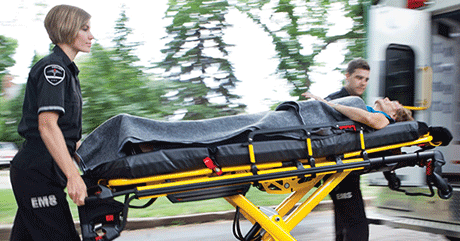 The Social Security Act spells out that the deciding factor in allowing payment for all ambulance claims submitted for payment is that the documentation explaining the ambulance transport must be clear that the patient could not have been safely transported from origin to destination by any other means of transportation.

While sifting through the many pages of “stuff” that we are required to read and monitor in our billing office on a regular basis, we found some internal guidance that the Centers for Medicare and Medicaid Services (CMS) released to their Medicare Administrative Contractors giving guidance on when to deny payment on ambulance claims.

In this document, CMS stresses that each individual’s medical condition must be explained using words that describe the patient’s “clinical medical necessity” leaving no doubt that the patient was not able to use another mode of transportation other than an ambulance.

The guidance expanded the discussion by stating, “It is important to understand that this clinical medical necessity aspect is a component of the definition of the benefit…”

A Benefit, Not a Right

We believe that many of us in the ambulance industry look at Medicare, Medicaid and even Commercial Insurance coverage as somehow being our “right” to be paid just because we turned a wheel.

If we had a dollar for every time we have heard…

“If the patient calls 9-1-1, we must respond and we pretty much have to transport so we should be paid!”

Or, in the case of a non-emergency/routine transport…

“If the doctor believes that the patient needs to go by ambulance then who is Medicare to say that they shouldn’t pay? The doctor knows best. They call. We transport. They should pay!”

Unlike some of our basic rights and liberties that we enjoy as Americans, we hate to burst your bubble but universal coverage for ambulance transports is NOT a right. Insurance coverage is a benefit, but it is a benefit of the patient’s meeting the stated criteria and that criteria boils down to one basic concept for most payers.

Transportation of the patient by any other means is contraindicated!!!

The concept of Medical Necessity is often very much misunderstood within the ambulance provider community. As providers, all of us are birthed in our careers by the notion that when the pager activates we have a duty to respond.

Likewise, we somehow extend that duty into the notion that the insurance payer (Medicare, Medicaid, Commercial…) have a duty to pay.

Not so!
The phrase Medical Necessity is a two part concept that must be understood as…

There are no givens!

There are no givens in the ambulance billing industry. We must prove with each claim using clear clinical documentation documented by the patient care provider that the patient would have been endangered and literally had no other means of being transported from Point A to Point B safely.

Plus, it’s our burden to explain in the Patient Care Report (PCR) that some form of diagnosis or treatment of an illness or injury to improve our patient’s qualify of life was performed either at the origin and destination. This is another aspect often overlooked in order for the claim we submit for payment to cover the cost of the transport to be allowed by the insurance payer for the release of payment.
In the end, the burden of proof remains with the PCR and the level of detail and explanation we provide to support the billing of the claim to the payer.