After two weeks of the major party political conventions, we can truthfully say we “feel the burn!”
Hold on…we’re not taking political sides. Note that it’s “burn” and not “Bern” that we feel, as in “burn out.” 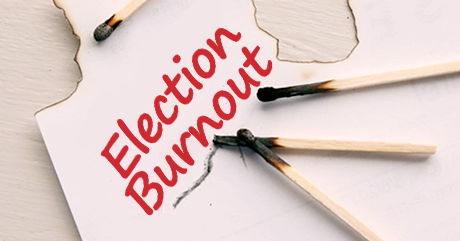 Our presidential campaigns in the United States are far too long. After a grueling year of endless debates and countless news cycle sound bites and now two weeks in a row of conventions, frankly we’re burned out!
And…there are still 102 days to go until we elect the next President of the United States.
Ugghh!!

Having spent countless hours listening to one side versus the other and all the interesting rhetoric that swirls around this most unique president cycle, we’re somewhat surprised how relatively little has been mentioned about healthcare in the scheme of things.
On the red side of the aisle, healthcare was mentioned in the context of repealing what we affectionately refer to as Obamacare. The opponents of the Affordable Care Act cite the increase in premiums despite promises of the exact opposite and the failure of the exchange system as the reasons.
For EMS and healthcare in general, undoing this initiative may create as much damage as leaving it in play. Imagine more turmoil in undoing insurance as we have come to now just understand how to work with. Imagine that suddenly the Medicaid ranks thin and more persons have no insurance coverage, even when that coverage is subpar at best and well below our costs to provide EMS services.
It would still create yet another round of uncertainty which we cannot afford.
On the blue side of the aisle, the far left progressives are dreaming of a “Medicare for all” system where universal, government-guided healthcare coverage would become the standard.
Imagine pulling 100% of our EMS revenue from a Medicare-like system! Start the defibrillator now as EMS readers of this space everywhere just suffered massive MI’s at the very thought.
Think about the ratcheting up of audit activity, countless forms, the bureaucracy, more revalidations, more revalidations, more revalidations (sorry….we got stuck there) and simply more entry of politics into the healthcare delivery system.
It’s painful to even think about it.

“Would there be any EMS left?”

More worrisome than any of this, is the prospect of our having to operate totally on a greater line of fee-schedule driven systems.
We all know that the national Medicare Ambulance Fee Schedule grossly underfunds our operations. So while advances in healthcare call for new methods, new equipment and more responsive staffing levels a large percentage of our revenue cannot keep up with our expenses because of the woeful Medicare and Medicaid fee schedule payment amounts.
Now take that one giant leap forward and consider that the majority of your billing income would be fee schedule driven (with the exception of liability-type payments such as auto and workers compensation insurance.)
While many EMS systems do enter into participation arrangements with commercial insurance, at least there is some wiggle room for negotiation in those scenarios. But, with a potential government-run system much like Medicare working with payment contractors and layers and layers of bureaucrats, the question begs… “Would there be any EMS left?

Who knows what’s to come. But there is a way you can influence the path that you think is best, be it red, white or independent. You- EMS YOU- must become involved in the process.
That doesn’t mean you must run for office or even champion one party or the other. But it does mean you must stay informed. It does mean that you must be active and support those initiatives already in place.
Consider supporting national organizations such as the American Ambulance Association or your individual State EMS advocate organization as they work broadly to influence the future landscape. Every now and then send off an e-mail or a letter to your Congressman, Senator or elected officials in your State government to let them know your plight as an EMS administrator or provider.
If you don’t think “Medicare for All” is a good idea. Then tell someone that matters.
On the other hand, if you think “Medicare for All” is the fix then by all means get behind those championing that cause.
What we do in EMS is too important to sit on the sidelines and wait for it all to unfold. We have to speak up for ourselves and our patients and initiate engagement that will shape the future.
The Ambulance Billing Services blog is brought to you as an educational tool by Enhanced Management Services, Inc. Enhanced Management Services, Inc. is an all-EMS third-party billing contractor serving Fire/EMS agencies across the United States. To learn more about who we are and what we do, please visit our website at www.enhancedms.com and click on the “Get Started” button on any landing page.